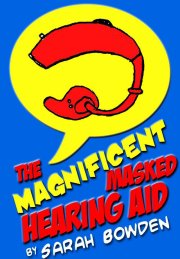 Sarah's thesis play, The Magnificent Masked Hearing Aid, was a featured production in the 2012 Seabury Quinn, Jr. Playwrights' Festival.  And in the interest of cataloguing Sarah's artistic influences, as well as the play's development, this space has been provided for web-readers to investigate her thesis.

The Magnificent Masked Hearing Aid revolves around a father and daughter who face the choice of getting her a risky (and invisible-to-the-eye) surgical implant while the daughter prepares to go to art school and build her future life as a comic book artist.  The play's blurb and sample scenes can be read here.  Further information about the 2012 Seabury Quinn, Jr. Playwrights' Festival can be glimpsed here.

As a hearing-impared playwright, much of Sarah's personal identity is informed by her vulnerability, what others might perceive as her weakness.  But through the use of hearing technology, she has found strength in her disability; much of her writing deals with discovering power via one's disadvantages or weaknesses, aka, she's the kryptonite playwright.

1)  Last winter, Sarah received a new digital hearing aid.  And her upgrade into digital technology made her appreciate anew all the advantages this technology has afforded her.  In preparing to write her MFA thesis, she began research on the latest developments in hearing tech, eventually landing on the Esteem, a surgically implanted device that allieviates previously uncurable sensorineural loss (the type of loss she has in her right ear).  This implant provided the perfect touchstone for the characters in her play, who spend the length of the script weighing the pros and cons of solving hearing loss at the cost of no longer wearing your identity on your ear.  For those looking for more information, links to the Esteem (on which the script's implant is based) and how it works can be found via Envoy Medical, its creator; more specific details about the overall use of the device can be found here.

2)  Some of the most remarkable research for this play was drawn from stories people shared about their hearing loss, explaining how they identitfy as people with hearing loss, and how technology has bettered or hurt their daily lives.  A long, long laundry list of touching blogs, videos and stories could be reposted here, but some of the most stirring examples come from the Esteem's website, where men and women share their experiences before and after receiving their implant(s).

Sarah Churman's amazing viral Youtube video of her first implant being turned on informed much of Sarah's writing during the rehearsal process, as well as one actress' building of the first moments she completely hears the world around her.  Churman's blog is a wealth of information about the hard of hearing vs. hearing experience, and her Youtube video (which moved Ellen Degeneres to fund her second implant) can be viewed below:

3)    The fascinating history of hearing technology and the questionable advertising practices to market said technology also played a huge role in shaping Sarah's play.  By focusing on how inventors and companies latched onto making hearing tech smaller and smaller for cosmetic reasons, Sarah was able to see that the benefits of hearing might come at the cost of displaying yourself for who you truly are.

4)  A recent story about a little boy who wouldn't wear his hearing aid, and Marvel Comics' push to help him adjust to life with the device, via his mother's contacting them, only cements Sarah's belief that there is a potent connection between the super-ability of superheroes and the otherness felt by those living with disability -- we can't know what being super feels like, unless we first feel its opposite, now, can we?  It is this paradox, the synthesis between strength and weakness, that's always drawn Sarah to comic books as a child and an adult.  So it only seems fitting that the play's teenager battling with her disability and identity is also an aspiring comic book artist.

Many superheroes influence and shape this play's outlook, not least of which is The Big Blue Boy Scout.  But another major draw is David Mack's Echo, one of the only Deaf superheroes Sarah feel a connection to as a woman.  Mack's depiction of Echo's disability visually through art provides the hearing with a better idea of the hearing-impaired experience; similarly Mark Waid's current run on Daredevil provides a similar forum for perceiving blindess.  But Echo's dialogue about herself while playing the piano rings most true to Sarah:  "It is the silence between the notes that is important.  That's where you'll find me."

In The Magnificent Masked Hearing Aid, Sarah tests whether or not she can bring her hearing audience into the world and perspective of the hearing-impaired, as well as involve the hearing world in concerns about vulnerability as power, potential over-dependence on technology, and disability as identity.